In the world’s oceans, human impacts such as over-fishing, habitat disturbance and introduced pollutants, have resulted in substantial habitat loss.  These impacts have led to concerns about the endangered species in our marine environment.  This identifies the need to understand which species are at risk of extinction in order to keep the chain of connectivity alive in our natural world.

This research explores the connection we have to our surroundings, and identifies just some of the human introduced aspects we need to change.  We need to take these changes on board and implement solutions, in order to reduce anthropogenic impact and unnecessary extinction of our fellow species.

We are all part of this sacred planet.

The seadragon from the Syngnathids family that includes seahorses, is endemic to Australia.  The iconic seadragon is found off temperate reefs from Port Stephens, to southern Australia, around the southern coastline, to Geraldton WA, on Australia’s west coast and including the waters around Tasmania.  There are only three seadragon species: the highly camouflaged leafy seadragon (Phycodurus eques), the weedy seadragon (Phyllopteryx taeniolatus), and the recently discovered ruby seadragon (Phllopteryx dewysea).

The weedy seadragon’s status on the IUCN Red List was changed in 2017 from “Near Threatened” to “Least Concern” but their population appears to be decreasing.  There have been reports on their decline from numerous sites around the coast, including right on our door step at Bondi Beach in Sydney.  Despite the beauty of these creatures, many aspects of their being and ecology remain critically understudied and only a handful of studies on them have been published.  There are concerns that the weedy seadragon’s decline is due largely to loss of kelp habitats such as the species Ecklonia radiata.  The kelp habitats provide camouflaging shelter and support the weedy seadragon’s preferred food source, small opossum shrimp.  We need to protect the kelp habitats and the biodiversity that they house.  As well as the worlds coral reefs, kelp habitats are declining as a result of climate change. 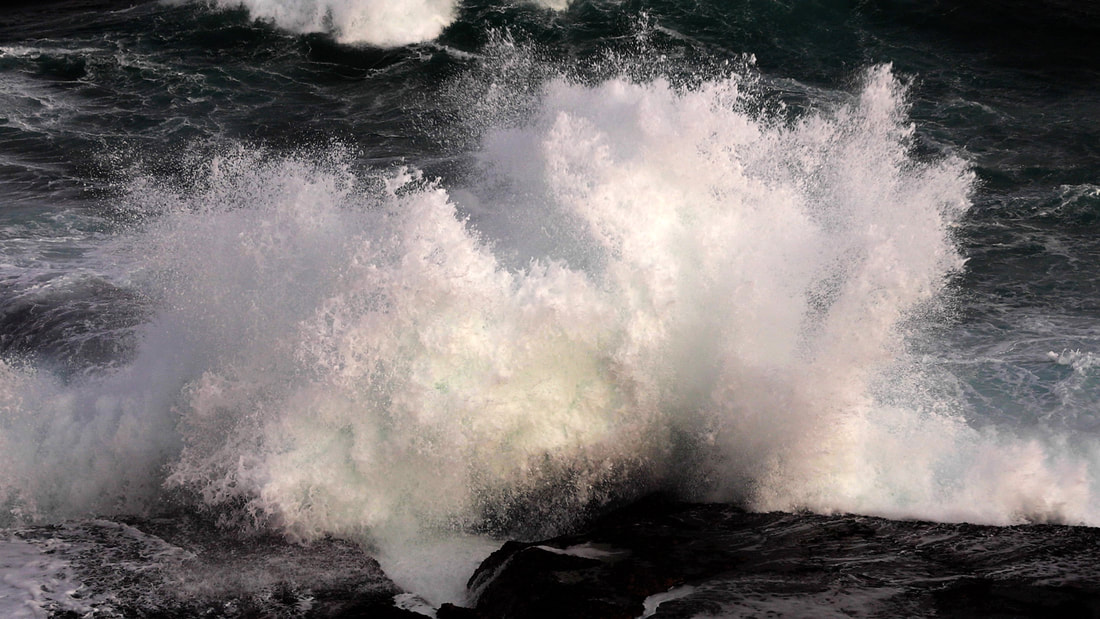 The UTS Fish Ecology Lab’s research team, assists with the conservation status of this precious species. This is done by studying population numbers, habitat use and behaviour of the weedy seadragon, which includes reproductive cycle and growth in their natural environment.  Some of the research has also looked into genetic diversity shift between the eastern and southern populations of weedy seadragons caused by the Bassian Isthmus, which was a land bridge that existed between Tasmania and mainland Australia during the peak of the Last Glacial Maximum.  The genetic diversity remained after the Bassian Isthmus disappeared.  This is one example that the weedy seadragon remains close to its original habitat. This suggests a constant need for a deeper understanding, knowledge and needs of each individual population.

A number of different data collection methods are taken place including genetic sample collection in situ, analyzing citizen science images of dragons for growth and survival, tagging observations and movement patterns and measuring home ranges of this endemic species.  Surveying areas along the reef by diving, assists in determining whether these declines are natural fluctuations, or whether they are caused by environmental or habitat changes.  This must be a priority for conservation.  The team have published five international papers on results, and have an ongoing monitoring program in SE Australia.

BEAUTY OF THE WEEDY SEADRAGON

With their large body size of 45cm, distinctive shape and striking color pattern a fused elongate jaw, bony plates covering their body like armor, and the absence of pelvic fins, the weedy seadragon is a species we need to understand.  These special creatures are weak swimmers and stay within 50m – 500m of their home.  The young weedy seadragons stay close to the substrate, rely on the kelp seaweed habitat and are resident in the same area throughout the year.  The reproduction of this species is different from many other marine fish that rely largely on larval distribution by the currents.  In contrast, the weedy seadragon exhibits parental care whereby a female deposits her eggs on the tail of the male and he carries the developing eggs until hatching.  The male moves into shallow sheltered waters, where fully-formed miniature weedy seadragon babies emerge.

These are just some beautiful and compelling observations of the Weedy seadragon, that should be part of our earth for the generations to come.

KARLA AND THE SEADRAGONS
https://www.uts.edu.au/news/campus-community/klara-and-seadragons 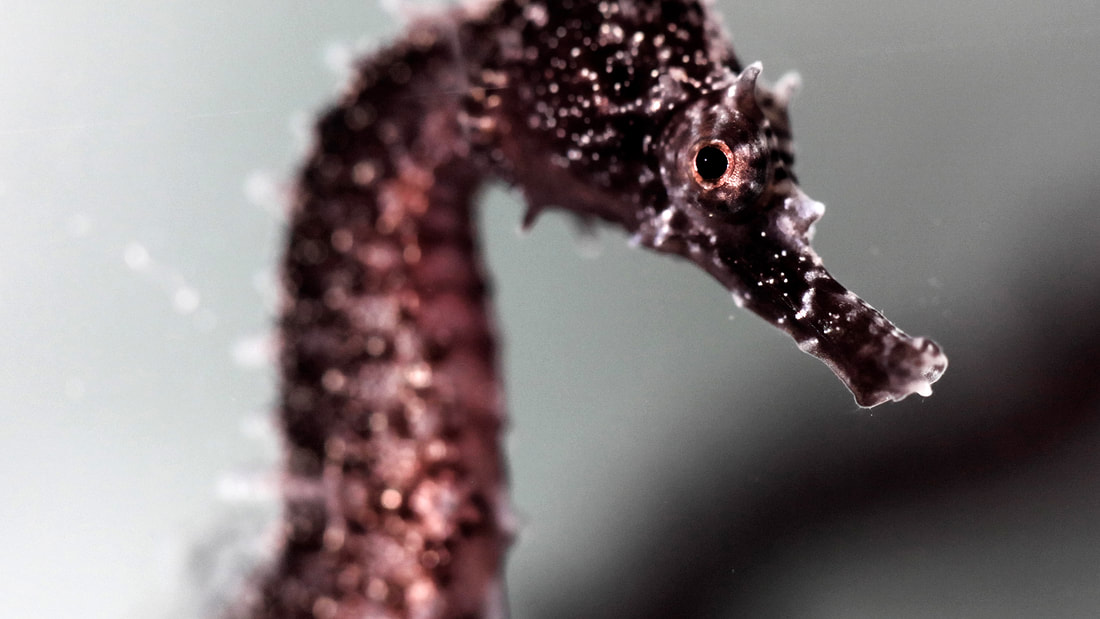 In our world right now over 37,400 species are considered endangered and at risk of extinction. This is due primarily to human activity; in particular pollutants and habitat loss from marine and land clearing. 41% of amphibians, 33% of reef-building corals, 26% of mammals, 36% of sharks and rays, and 14% of birds are under threat.

It is crucial to protect what we have left.  The time is now.

The White’s Seahorse is an endangered species found locally in Sydney Harbour and in our waters between Jervis Bay and Queensland.  The White’s Seahorse, also known as the Sydney Seahorse, is one of three Seahorse species endemic to Australia.  The natural home and habitat for these creatures are sponge gardens, seagrass meadows and soft corals.  In Sydney there has been a massive seagrass decline over recent years causing remaining Seahorse populations to rely on manmade structures for their habitat.  This is leading to further displacement and dramatic population decline.
​THE LAB
Scientists at the University of Technology Sydney are collaborating with organizations such as the NSW Department of Primary Industries and SEA LIFE Sydney Aquarium and together have started to recover the White’s Seahorses by implementing a new breeding and conservation project.  In this critical program Seahorse babies are being born into custom-built tanks at Sea Life.  The male
gives birth to up to 100-250 young at a time and the juveniles are then carefully re-introduced into the harbour. They are then observed weekly by a team of divers and a UTS master research student.

To assist in recovering populations suitable habitat must be available for the Seahorses. One solution has been to create Seahorse Hotels.  These are metal structures placed around six metres under the water’s surface.  This structure simulates a natural habitat and over time becomes overgrown by sponges and algae which have previously been lost.  One of the relocation areas is Clifton Gardens in Mosman.

It is unknown how many of these majestic creatures are still in the wild but with the Hotel program baby Seahorses are now growing well in their new natural environment. 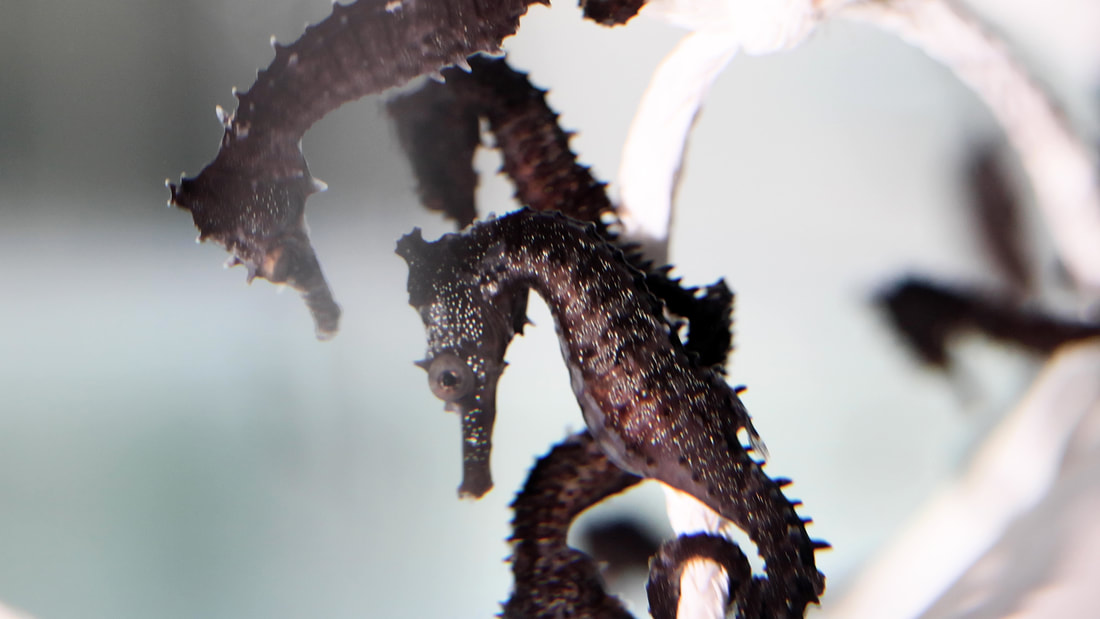 ​BEAUTY OF THE WHITE’S SEAHORSE

With their other-worldly eighteen dorsal-fin rays, sixteen pictorial-fin rays and their tall coronet and long hyper-real snouts, these beautiful White’s Seahorses are part of the trophic chain the makes up our precious biosphere, environment and living world.

We are all connected. 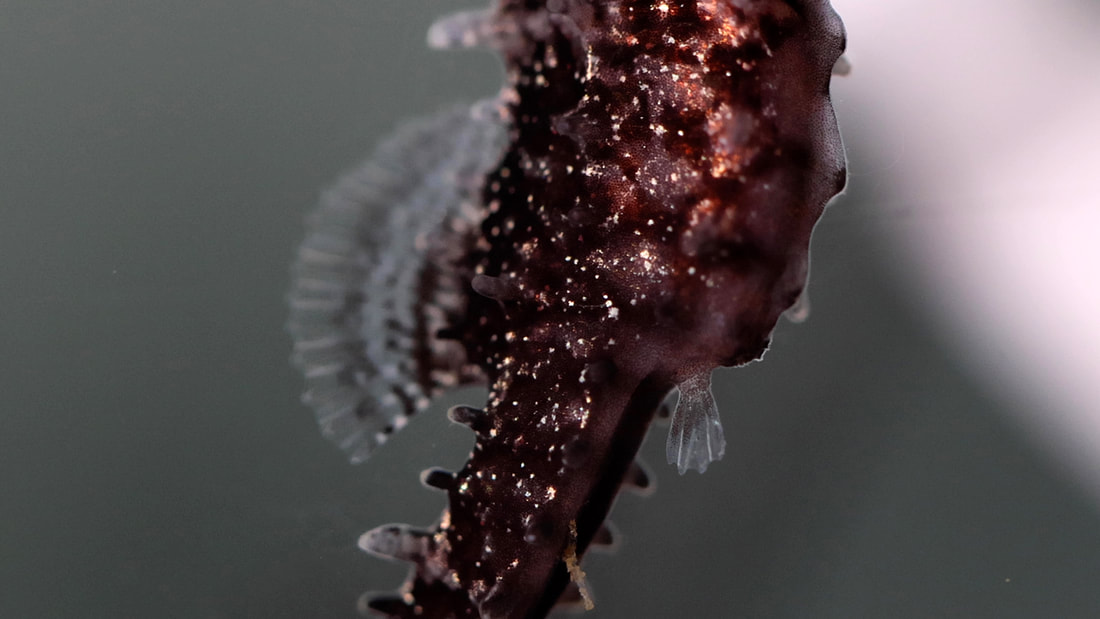 FOR MORE INFORMATION AND DONATE
https://www.visitsealife.com/sydney/whats-inside/seahorse-breeding-program/ 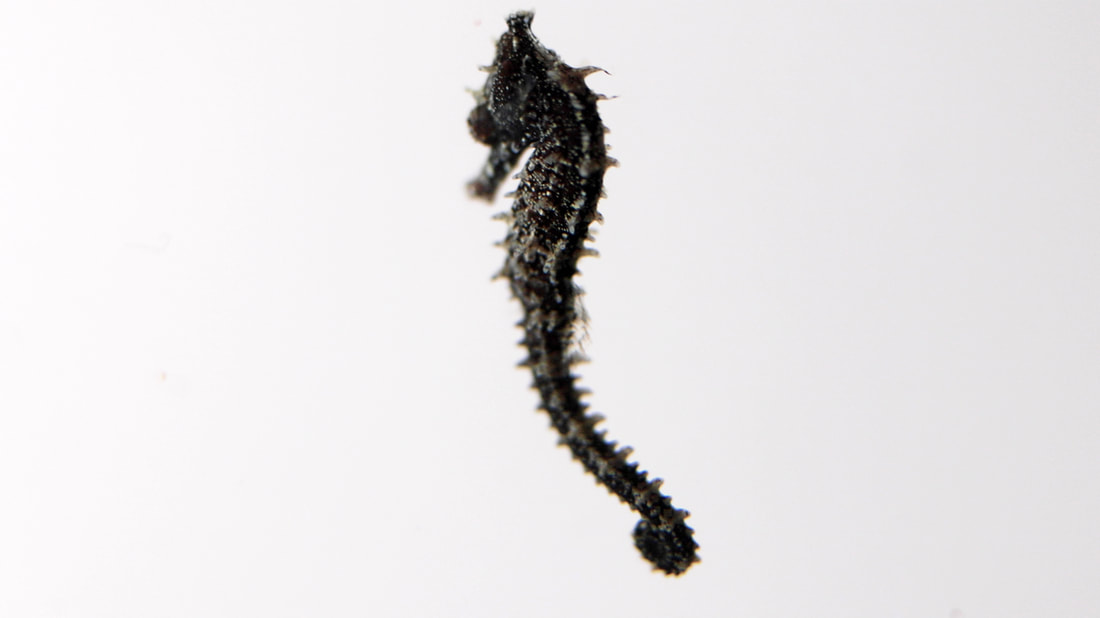